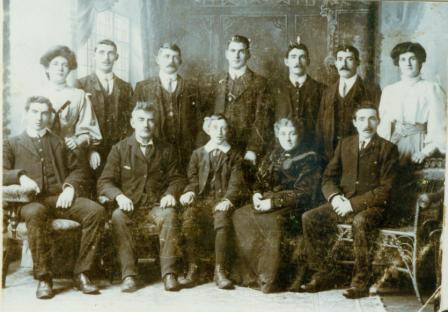 Back Row Left to Right;

The story of Mary Macintyre Boyd.

We had three different sets of clothes, one for Sunday one for school and a change when you got home from school.
We had always missed our De, as his contracts used to take him away a lot, but he never failed to come home on a week-end, Sundays were family visiting days to both Grandparents, first to my Maws parents for dinner and of course our supply of eggs, pork if a pig had been killed also a chicken. Some people only had a chicken for Christmas, but Granny kept Geese and thats what we would have. The Geese were vicious birds at times and used to run after us. I think perhaps we used to annoy them, as everything was so peaceful and quiet, before our mob descended on them. My De and Maw rode bicycles, they would strap a cushion (old gold) on to the front and take the girls in turn, and my brother had his own cycle. We saved our pennies until we had a sixpence, then we hired a bicycle, so that we could learn how to ride it.
My Granny Boyd was the sweetest, kindest dear old lady. I loved her very much and often got myself in to trouble, for coming home late from school. If the truth he known at the time, it was because I had crept up the side of a hedge to visit her, she was so loving. I was christened after her (Mary Mcintyre Boyd).
When we lived in Brightons, we lived near the and it was a must that we attended Sunday Morning service at 11.30, Sunday school at 3pm, and evening service at 6pm. There were the picnics, gala days and crowning the Queen. Our annual trip was always aboard two of the Coal Boats that sailed quietly along the . Picture this if you can! All the parents of the Sunday school children took their pails and scrubbing brushes down to the boats. They were scrubbed and cleaned for the trip to Linlithgow, about four miles away. In spite of the coal boats, we had to be dressed in white dresses, colored sashes and ribbons to match. On week days our hair was plaited, but on a Sunday our hair was allowed to hang down. When we arrived at our destination, we had to walk quite a distance and it was done in a very orderly fashion. Each Sunday school class had the same colour of sashes and ribbons, so we all had to get sorted out into our little groups, and march down to . Even back then it was crumbling, there was a dungeon, where according to history books Mary Queen of  Scots was transferred from Haining Castle and spent some time in that dungeon in Linlithgow Palace. When we arrived at Linlithgow Loch where the old Palace was built, we were all grouped around in a circle and given a bag with sandwiches, one cake (Maws usually) two biscuits four pan drops or caramels. We also had our tinnies (tin cups) attached to our colour of ribbon that hung around our necks and the beverage was milk or Irn Bru a much flavoured drink, but! We were always warned, You drink that milk and dont eat too much rubbish or you will be sick going back home. We could go for a sail on the , for a threepenny bit, thats if you could afford it. Also at the Palace there was a little shop that sold postcards with a penny stamp on it, they cost two pennies. We sent one to our two Grannies; just t let them know we were on a trip (four miles). After six hours the weary travellers or should I say sailors returned home on our luxury cruiser. The coal boats were pulled by sturdy horses that walked along the canal banks; we always made it our business to find out the name of the horses, so we could hurry it on by chanting to it.
After two wonderful happy years in the Dairy store, my older sister Margaret caught scarlet fever. The Dairy was closed down for fear of infection in the dairy side. This was another fatal blow to my Maw we were not without money at that time, as a compensation claim had gone through because of my Des accident, but how long could that last.