The Salvation Army flag - an emblem of faith
Through the explanation of the colours and the writing, the flag of the Salvation Army becomes actually a symbol of the faith of each Salvationist. The blood of the Lord Jesus Christ (red), which cleanses and delivers from our guilt and the Spirit of God (yellow) who leads and guides, and finally the blue border as symbol of purity. Salvation and sanctification are expressed through the words "Blood and Fire".
More information ? Click here The hall (seen on the above photo on the right) was opened in 1877 as a "British Workmens' Public House", it was designed as a restaurant with a library and reading room, it later became known as the "coffee house", it seems that this was mainly financed by Mr. Livingstone Learmonth of Parkhall.

In 1882 the hall was gifted by Mr. Learmonth to The Salvation Army on condition it was used for worship.

The connection between Maddiston and The Salvation Army can be traced to when Mr. Learmonth heard the army mother, Catherine Booth, preach in Seymour Hall West London and went back to his town house in Gloucester Gardens and told his wife she must hear these people and soon they were both confirmed Salvationists. Wherever Mrs. Booth went to talk Mrs. Learmonth was by her side, eventually, sometime in 1882, Mrs. Booth came on holiday to Edinburgh and Mr. and Mr. Learmonth who were staying at their "Country Residence"  asked her to conduct  a meeting in Drawing room of Parkhall House. 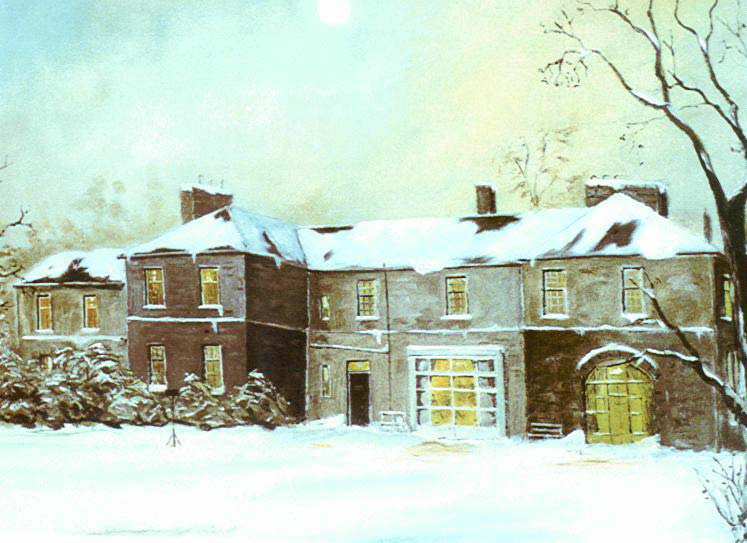 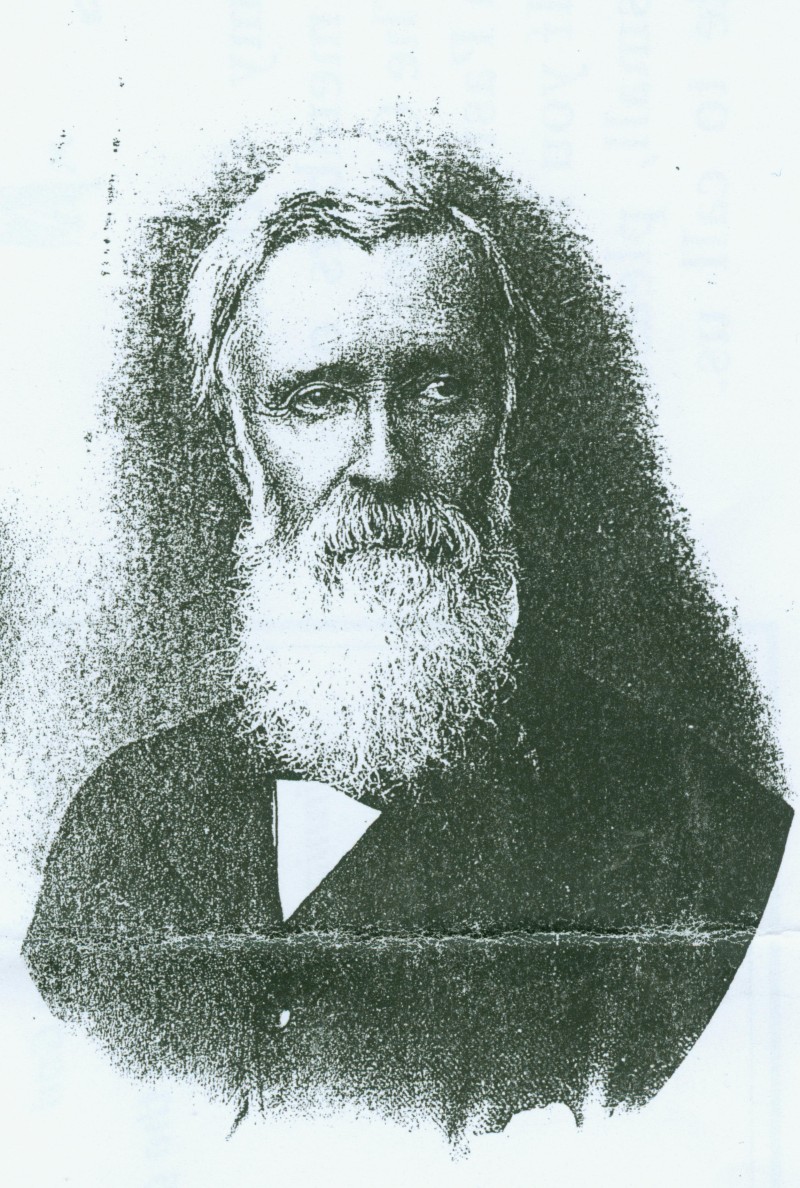 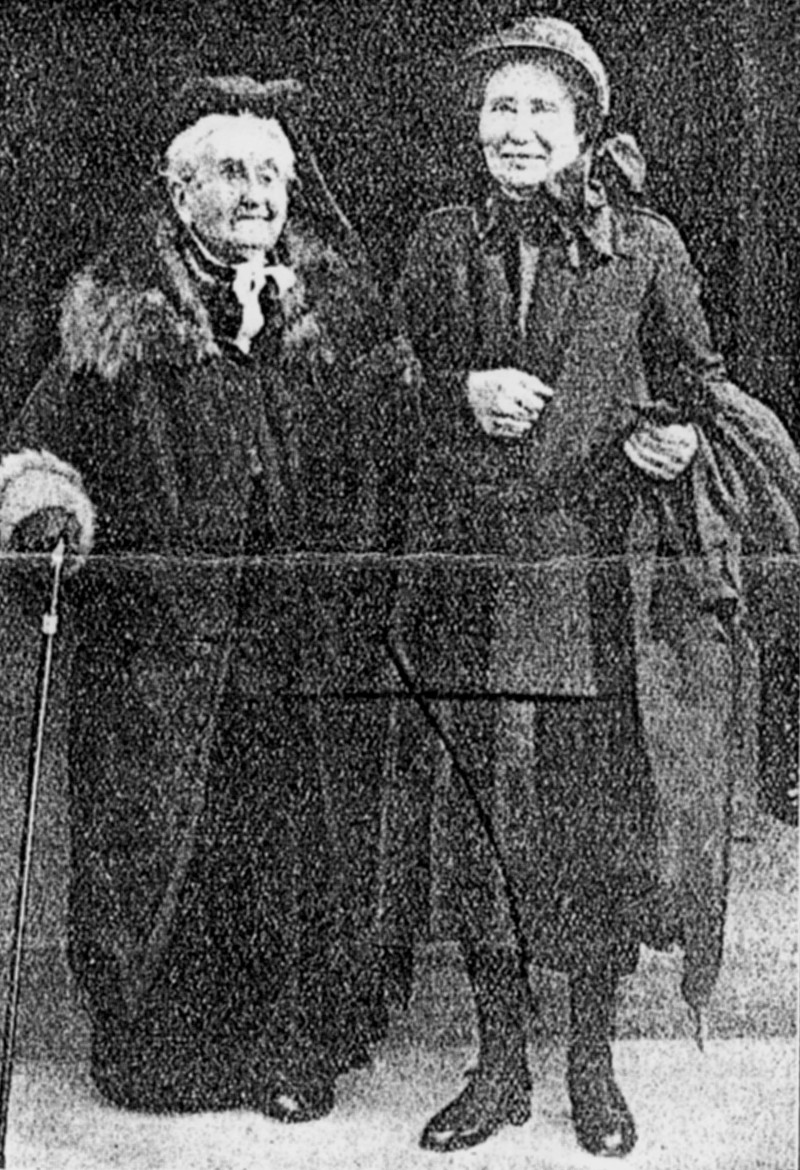 The estate was eventually concecrated by Mr. and Mrs. Learmonth to the work and service of The Salvation Army. Army officers from the General downwards were entertained at Parkhall, Mrs. Learmonth adopted the Army uniform and even the childrens pinafores were decorated with the red 'S'. The house practically became an Army Training  Home. Maddiston Corps was originally known as the Parkhall Brigade as the meetings were held in a barn at Parkhall.

Founders of the Salvation Army, William and Catherine Booth

Among the Officers that 'came out' from Parkhall was Mrs. Learmonths sister Minnie Reid (above) who after long service to The Salvation Army in Britain and the Continent  eventually married Commisioner Booth-Tucker (Fakir Singh) and went to serve with him in India. 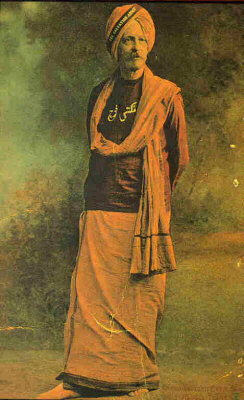 Click here to visit "The Salvation Army Museum in Basel Switzerland " (well at least visit their website as it's probably cheaper!!).

Brigadeer Bannister, as Shanti Bai , served in India for many years.

Major Todd, for so long Cashier at National Headquarters and who later became the Chancellor of the Exchequor for The Salvation Army, started his Army career at Maddiston. 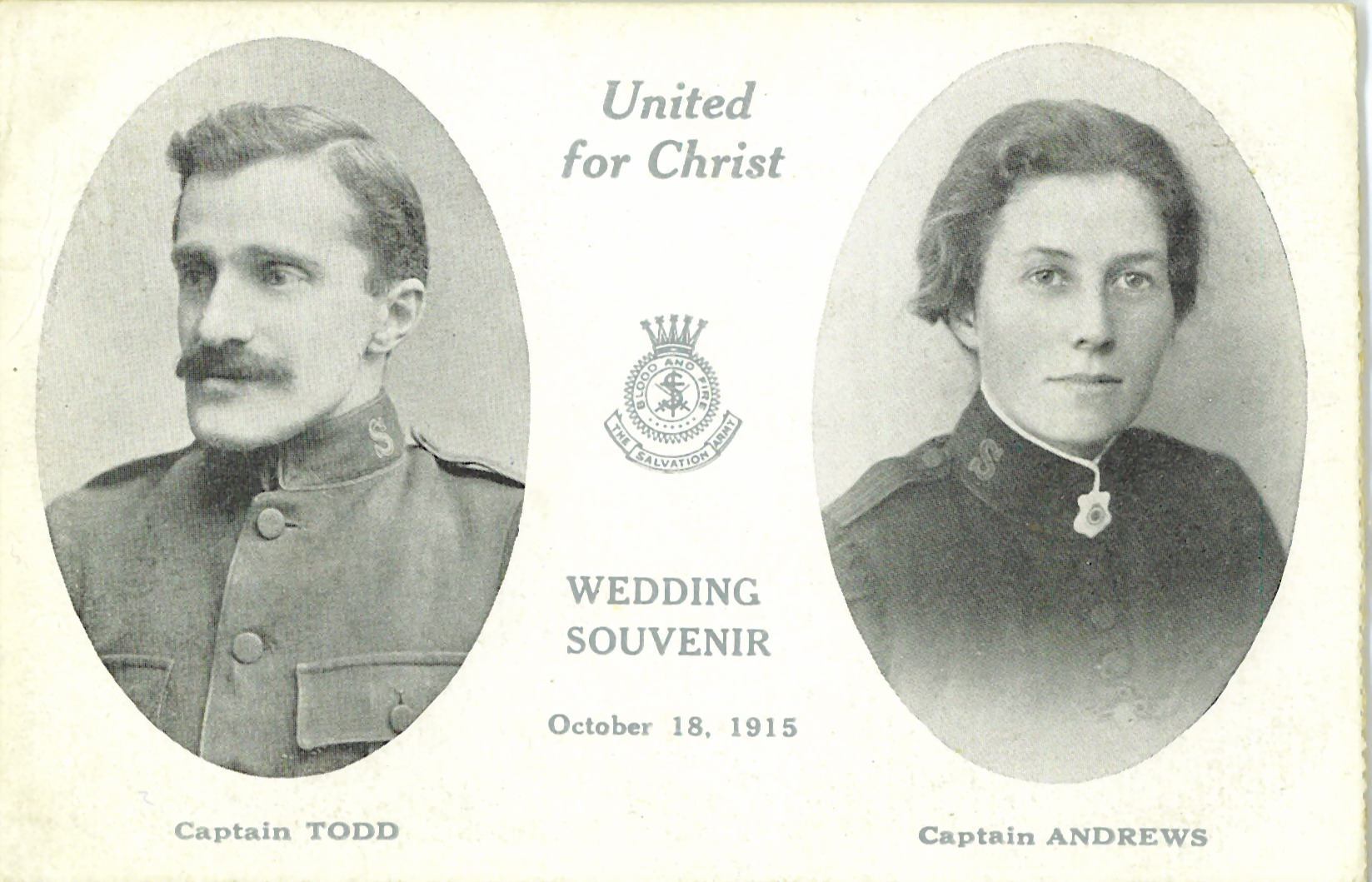 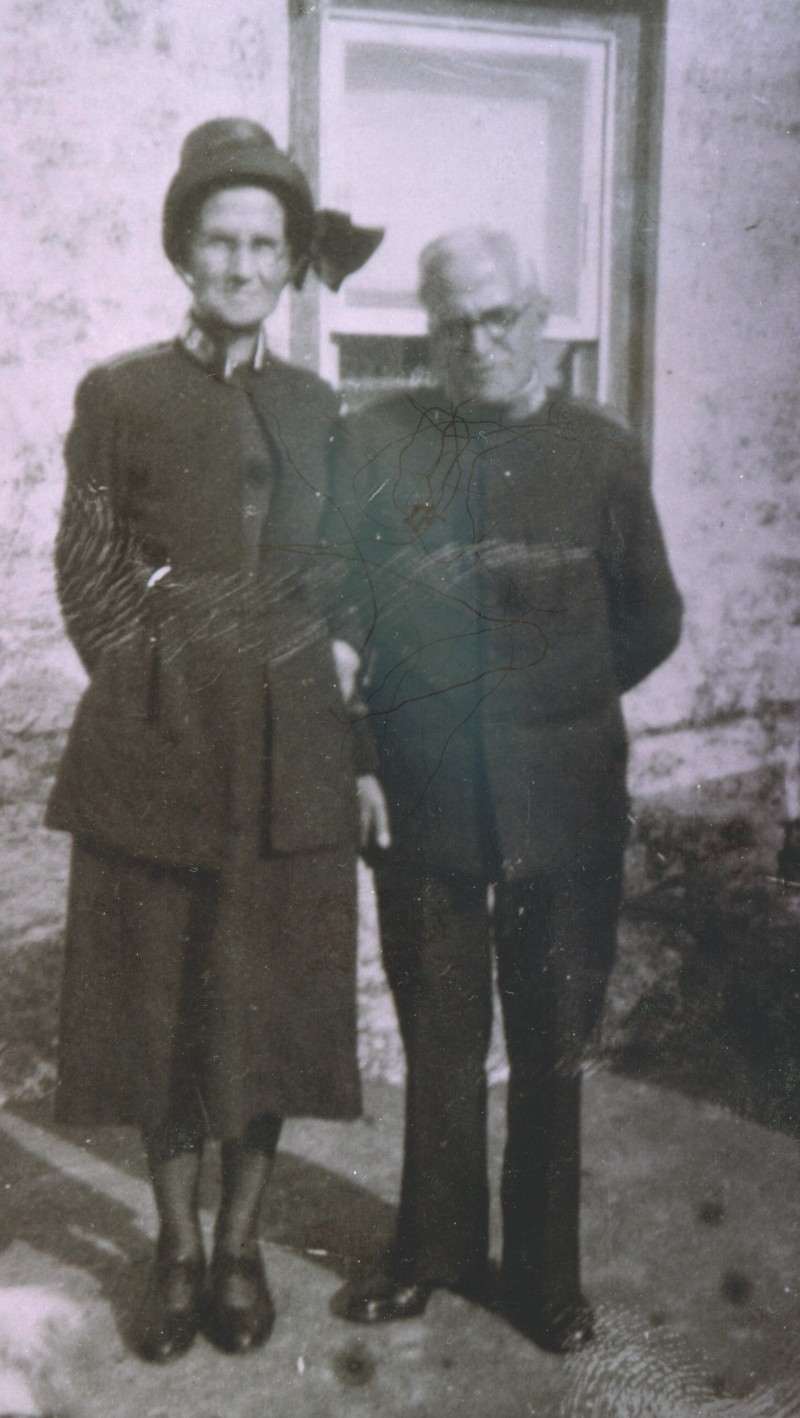 For many years a prominet worker at Park Hall was Miss McGrath, and Irish girl who had been sent to 'billet' at Mrs. Learmonths home in London, she was invited to Scotland and stayed here as Leader of the Brigade. 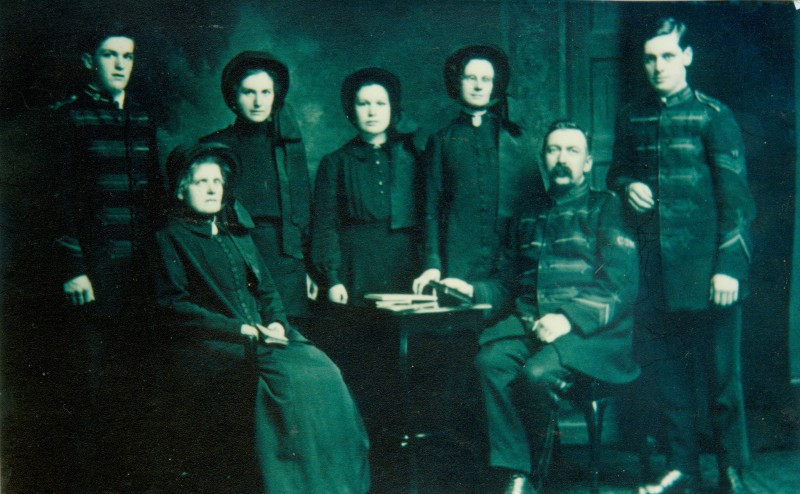 The Ferguson family, early members of the Maddiston Corps of The Salvation Army. They moved away from Maddiston to St. Andrews.

The Fry family were always welcome guests at Parkhall,Tragically Staff Captain Charles Fry (The Salvation Armys' first bandmaster) died at Parkhall in 1882 during a visit there, his widow remained on at Parkhall for many years, Staff Captain Fry presented the drum to the Maddiston Corps and it is still used (now very occaisionally) to this day. 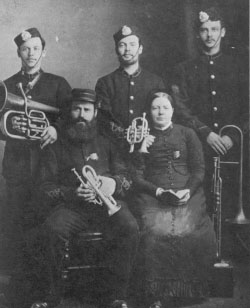 Charles Fry along with his three sons Fred, Ernest and Bert in the year 1878 founded the first Brass Band of the Salvation Army in Great Britain

On Saturday 27th August 1887 The Salvation Army (Glasgow District) held a "Field Day and Review at Parkhall with Col. Edmonds in command (he'd been a frequent visitor to Parkhall) Colonel Edmonds was the Officer in charge of The Salvation Army in Scotland. 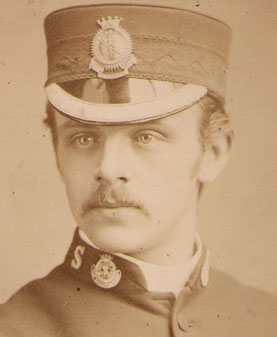 A booklet prined for the day advertises :-

SPECIAL SALVATION ARMY TRAINS (North British) will leave Queen Street at 7.15a.m. : calling at Greenfield, Coatbridge, Commonhead, and Slamannan, on the above day returning the same evening, leaving Polmont for Glasgow, and Bowhouse for Hamilton, at 10 o'clock.

HOW TO MAKE THE BEST OF THE DAY

REMEMBER constantly the one object for which all our great celebrations are held, viz:-

TO SAVE THE WORLD!

and to demonstrate that there are a people who believe in such a cause, and have dedicated their lives to fight for its accompishment. Examine yourselves in the light of all you see and hear during this day of God's wonderful power to save and keep us from sin. The songs, the testimonies of the Soldiers, especially the saved drunkards, and last, but not least, the "War Cry" will help you to this end. Ask yourself what you are doing,or are willing to do to help God to get back his own- to save the world. The Holiness Meeting announced for 11 o'clock, in the LargeTent, is a fitting commencement to our proceedings, and your attendance at it will show that you put God first this day, and recognise that all holiday making should be in the Lord, and mean so much more spiritual blessing to yorself and others. You must be in good time to ensure getting in.

If you are a Soldier do not fail to rally round your own flag at 3 o'clock, for the Open Air Meeting to be conducted by your Corps at that hour. If not a Soldier you should attend one or other of the Open Air Meetings, wherever you feel you can get the most blessing, and listen till your heart burns within you, and you are led fully to consecrate yourself to the Lord, if you have not already done so.

Between the meetings, whatever others may do, amke the best of the time in looking after your own soul and the souls of others, and so promote the interests of the Kingdom of God.

Take part in all the marches, be attired in full uniform, come with a heart full of faith and praise, and if you play any musical instrument bring it with you.

Use every opportunity of the day to show everybody who sees you that you are truly saved, and a Salvationist in deed and truth, and thereby recommend you Lord and Master, and encourage all men to serve Him also

In the Park the Corps will be formed into Sections as follows:-

5. - Parkhead, Tollcross, Paisley and the South

The Rescue Brigade will have a stall on the grounds. friends are invited to send articles useful or ornamental to be sold for the benifit of the "Home of Help and Love" fot the fallen.

A Cloak Room will be provided for the leaving of Bags, Instruments &c., at 1d. each article.

A Lost Property Department will be connected with the Headquarters for the Day on the Grounds. Anyone finding property of any description will please leave same here.

Refreshments at moderate prices will be served at the small tents.

On SUNDAY, Aug 28th, Holiness and Salvation Conventions in the Large Marquee all day, commencing at 11, 3, and 6.30. Colonel EDMONDS, Major and Mrs. DEAKIN, and other Staff Officers will be present.

GENERAL ORDERS FOR THE DAY

Colonel EDMONDS in command, supported by the following Staff-Officers :- Major and Mrs. DEAKIN (Glasgow District); Staff-Captain FRY (A.D.C. and Secretary to Col. Edmonds); Staff-Captain JACOBS (Dundee District); and a large number of Field Officers, and about a thousand Soldiers and Friends.

Mrs. Livingstone-Learmonth, Miss McGrath, and the Park Hall Salvation Brigade will take part in the proceedings of the day.

8 A.M. - The Special Train will leaveQueen Street for Polmont.

9 A.M. - Arrive at Polmont . - Troops will march with Bands playing and Colours flying to the Park.

1 till 3P.M. -  The Grape, Peach, and other Fruit Houses, the Gardens, and Cattle Houses will be open for inspection. To prevent overcrowding in The Grape and Peach Houses, a charge of ONE PENNY will be made at the entrance. Grape Vines from Lebanon, Hebron, and Eshcol, of Scriptue fame will be on view.

3 till 4 P.M.  - Rescue Meeting in the Large Marquee and Six Open-Air Meetings in different parts of the Park. The various positions will be pointed out to Corps when they arrive.

6 P.M. - All Soldiers and Officers to rally at their standards for Grand March-Past.

7 P.M. - Demonstration of Saved Drunkards &c., in the Marquee and Barn.

8.45 P.M. - Each Corps rally at its standard for Torch Light Procession to Polmont Station.

The officer best remembered by the group from the thirties was Captain Martin, he was married in the Maddiston hall to an officer who had previously been stationed here. Captain Martin kept in touch with many of the Maddiston Corps and often visited the Haldane family.

Eva Haldane was the young people's Sergeant Major and was the leader at the Sunday Schools held from 10 till 11 and 12 till 1.

Morning meetings were held between the Sunday Schools, in the afternoon there was three open air meetings held at different points in the village with the evening meeting at seven back in the hall. 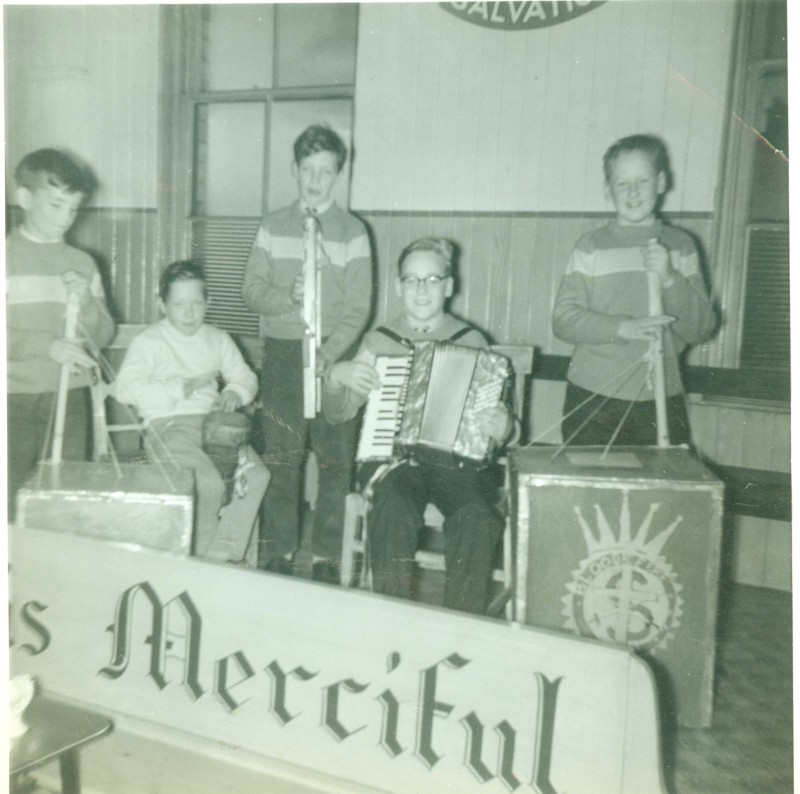 The "G. F. Boys" When Skiffle was in the height of it's time in the limelight Nancy McKinlay started a group singing the choruses we sang every Sunday at the Sunday School (The "G" and the "F" came fom our registration  (?) numbers), at the height of our fame we played at Bellahouston Park after the "Joy Strings".  Can't remember the first two boys on the left but Richard McCarthy played the Wash Board, Duncan Leask on the Accordian and I (David Leask) played one of the Tea Chests. 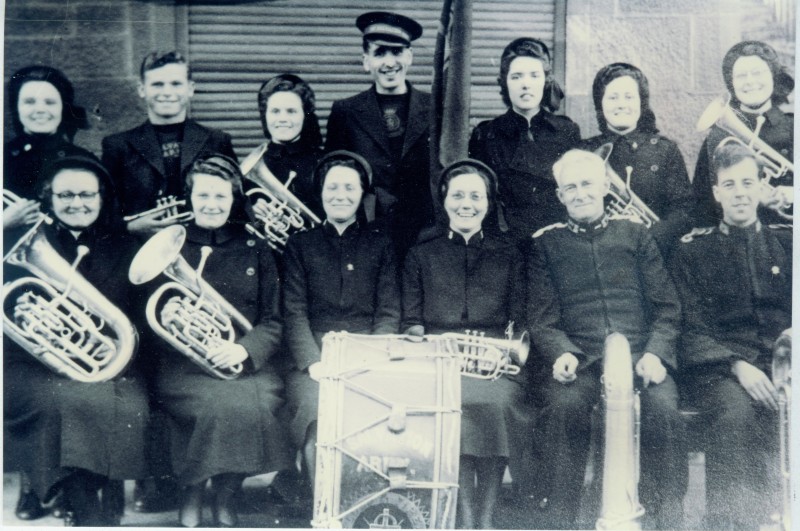 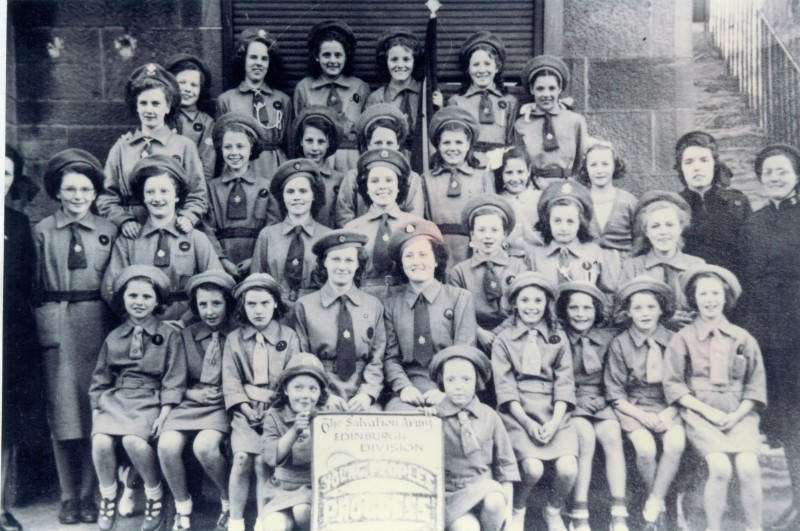 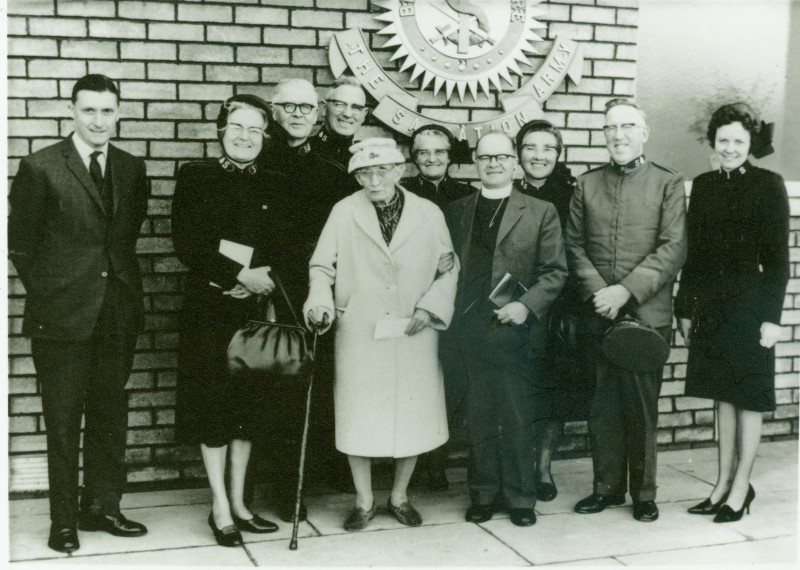 Saturday, July 31st, 1965. The opening and dedication of the New Salvation Army hall built almost opposite the old one which was demolished in the name of progress (it was progress to knock down the heard of the village?) Miss May Gray - Buchanan of Parkhill ( old lady in white) Rev. McKinnon of Redding Church holding on to her. Captain Dawson of Maddiston Corps, extreme right, Mr and Mrs Clark of Edinburgh ( Commander and Mrs. Clark? ) are also in the picture but I'm not sure where. The Crest of the Salvation Army, for the meaning of the symbols on the Crest, click here
Special thanks to "The Salvation Army Museum in Basel Switzerland "  for the use of some of the material on their website and to David Armistead a retired Salvation Army Officer from Wick for more information reguarding the Livingstone-Learmonths role in The Salvation Army.