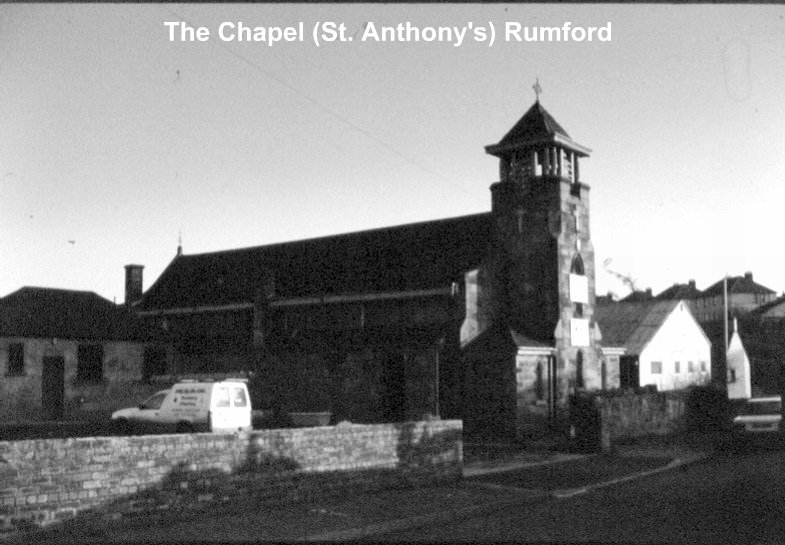 The report from the " Falkirk Herald" ran thus;

"[ at Rumford ]. Early on Sunday morning Canon Grady, accompanied by the full choir of the Falkirk Chapel, went to Rumford where the Rev. Canon duly blessed the new building according to the rites of the church. Archbishop Smith thereafter preached the initial sermon from the text John iv, 24, upon which his Lordship preached a very eloquent sermon. The Sacrament of Mass was sung by Canon Grady and choir.

Mr. MacDonald, conductor of the Carron Band, led the music, which included the Winter Mass and Novellos' arrangement of the " Adestes Fideles ". At the harmonium Miss O'Conner presided, and solo's were sung by Miss Flanagan and Miss Bridget Owen, Miss Mary Owens and others. The building thus dedicated is an oblong structure some sixty two feet by thirty feet. Its design is unique, being the original design of Canon Grady. The Rev. Canon stated concerning the state of his faith, that whereas the Reverent Paul MacLachlan 45 years ago held the ministry of nearly all of Stirlingshire and part of Linlithgow, there are to-day 16 priests engaged in the same work."

The chapel bells rung out over the villages every day at 7.30, 12 noon and 6 p.m., mass was at 9 a.m. every morning (and two masses on Sunday) then on Sunday and Thursday night there was Benediction.

A service bus ran  every Sunday for the catholic communities of Whitecross, Standburn, Avonbridge, Blackbraes, California, Sheildhill, in fact all the surrounding area who worshipped at Rumford.