Just incase you haven't noticed, this page has been much reduced by dividing it into it's constituent parts.

Think of the Brethern in Maddiston and one name springs to mind, James Black. Jimmy, who hailed from Airdrie, came to Maddiston to work at Manualrigg Coillery as an office boy then became a miner there until its closure in the nineteen twenties, he then became the Absentee Officer for Muiravonside School Board.

Jimmy preached the gospel for so many years in the hall down the Coal Road that the hall became known as "Jimmy Blacks' Hall", Jimmy was also a tireless worker on behalf of Polmont Borstal and received the British Empire Medal for his services to that place.

Meetings were also held throughout the villages, many remember the men in black suits, bowler hats and umbrellas  ( Gods work won't wait for the sun to shine). 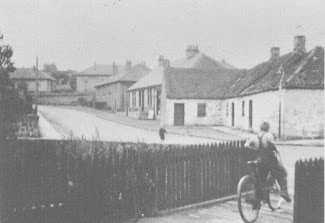 Fred Dougall began the faith mission at the corner of Greenhithe and Carron Terrace; Fred was a lay preacher (originally a Methodist).  Pilgrims from Ireland came over to help Fred in his mission; they set up a marquee at the putting green in Brightons (where Dr. Erskines’ house was built - the corner of Main St. and Station Rd.) They went round the villages playing concertinas, singing and inviting people to their open-air conventicles.

Fred Dougal and John Anderson preached here every Sunday.  The Sunday school was run by Brightons Church; Mr.  Raeside who was the Headmaster of Redding School was in charge of the Sunday school.  Pilgrims, mostly from Ireland came here; they were mostly female and wore felt hats of the type seen in medieval paintings.

Dennis Barnes came to the village periodically and pitched his marquee at the I.L.P. hall, he and his wife, Hetty Baxter, travelled the country in a caravan. Denis was born in Dumfriesshire and became a boxer, amateur then professional, moved to Birmingham, started up boys clubs and then seems to have travelled round preaching the word of God to the general populace.