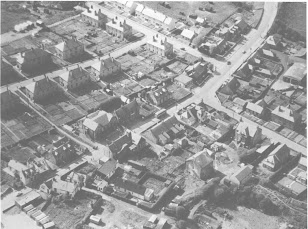 Description of the Photo

Starting at the bottom left of the photo the building on the right of the Main Street (bottom of the photo) was Archie McAlisters Garage with a row of individual garages behind it.

Andersons Buildings sat here the first tenant in this row of three room and kitchens and one single end opposite the smiddy was Janet Hunter who lived here with her brother Wull (many of the group remembered  "Black Jen" sitting on her steps, always with a pipe firmly clenched in her teeth), who had a talent for making "Ox-tail Potted Hough".

Henry Leigh and his wife and family were next in the row.

John and Lizzie Muirhead and children, Jessie, Rab, Tam, John, and James lived here in the single end; it was Rab who along with John Chisolm started the Maddiston Cycling Club or M.C.C for short! The premises were in a small hut by the smiddy.

John and Emilia Clarke's Fish and Chip shop was on the corner of the Main Street and the Close.  Emilia was Italian and had that rather attractive Scots/Italian accent, John Clarke had a motorbike and sidecar on which he and his wife could often be seen round the village and on Sundays they invariably went to Carriber Glen.  Alec Hunter used to go round the villages with a motorbike and sidecar selling ice cream he got from Clarke's shop (see the photo at Quarrellhead).

Some houses had gas, some used paraffin lamps for lighting, cooking was done on a range in the kitchen and all had outside toilets and washhouses.

Turning right, down  The Close the next house was not actually part of the row but a completely separate four-roomed cottage:

The Johnstone family lived here, Peter, Elizabeth and nieces Margaret and Jean.  Both girls became teachers then Jean entered the Ministry and Margaret became a Matron in Bellsdyke Hospital. This house also had an outside toilet and washhouse.

These buildings have all gone now, the room and kitchens were demolished, Johnstones cottage became Bob Jamiesons grocery shop after the one opposite burned down.

The next area in the photo is empty but there was houses down here and at one time the school was here as well, the area straight on is The Haugh and the building to the left is South Rosemount.The building over from S.Rosemount (which looks quite new) was the Bookies.

Turning back up The Close was The Iron House or the "Tin Hoose" , this building was built of metal sheeting; hence it's name and was lived in by Mr. Toye.

The second house in the tin hoose was empty at this time. The Tin Hoose consisted of two rooms and kitchens with ranges and sinks in the kitchen, it became the Old Folks Hall after the Welfare Hall was sold to Smiths.

Mrs. Fergusons (Bonnie Annie) ran a wee shop down here in a cottage in the close; it was a general grocer but had none of the trimmings of the proper shops (not even a sign outside to say it was a shop.)

Bert and Adam her twin sons lived here too. The cottage was one of the elder ones in the village and had much in common with such buildings as Quarrellhead, Manualrigg and the Red Raw.

Miss Cunningham and her brother William lived in the next cottage at the top of The Close.

Mr Topin had a small drapers shop in Salferall Cottages as this row was called. The Salvation Army officers quarters (at this time Mr. Dalzell) was upstairs, but he didn't seem to be there for long and very few of the group can even remember him.  This shop became the Post Office until the present one was built at the bottom of the garden of Viewfield Cottage (run at first by Bella Hastie then Charlie and Barbara Macmillan). Most of this building was taken up by the Salvation Army Hall, t

The next buildings were Mafeking Place, Mr.  & Mrs.  Angus and daughters May and Beatrice lived in this first house of a block of three semi-detached cottages.

John was a miner at Redding Colliery and was a keen canary breeder.

David Angus (son of John, above) and his wife, Elsie Fyfe, with their children, Ian and William lived in the last house in the row.  David was a Clerk at Redding Colliery and like his father was a canary breeder.  These three cottages were room, kitchen and sculleries with outside toilets and washhouses.

Hunters shop was in an extension built on the end of Mafeking Cottage, this was another of the shops that seemed to sell everything.  Jenny and Jemmima Hunter ran the shop, the Hunter family built this row at the time in the Boer war and Mrs Hunter deemed this a suitable name for the row in celebration of the relief of Mafeking.

John Hunter and his wife Helen lived here, all the men in the family were bus drivers, Mr Hunter has a small business of his own at one time but he was either forced off the road to increased competition, or he was bought out by one of the larger companies emerging at this time.

Mafeking was also the call house for Dr. Robertson (this entailed leaving messages here for the Doctor to pick up when he came into the village).

Caterine Cottage was the other half of Mafeking, lived in by Mr. Sharp.

The downstairs consisted of two room and kitchens (with sculleries), both had front and back doors, outside toilets and washhouses.

An internal stone stairway lead to two houses upstairs comprising two rooms, kitchen and scullery, once again with outside toilets and wash houses.

Paraffin lamps lighted the houses until electricity was brought in; cooking was done on a range in the living room.

The range could be very elaborate with lots of brightwork (brightwork was polished steel) and brass and took a full morning to clean (usually a Friday) with "ZEBO" black lead and a burnisher, emery paper or just ashes and water mixed together, for the brightwork.

On the mantlepiece lay a great array of brass ornaments, boots, candlesticks, tea caddy, biscuit barrel and of course the wally dugs, just under the mantlepiece there was a brass rod (or a length of string) to hang the pit claes from for drying or just to hang a dish towel from.

The next building sat up the lane behind North Rosemount and could be got to from the close as well.

James was a checker at Grangemouth Docks and died in an accident there.

There was two upstairs houses accessed by a stone stairway on each gable end of the building, each were room and kitchens.

Downstairs consisted of three houses, to the south was one room and kitchen with back and front doors and to the north of the building were two single ends, one on the east and one on the west (back to back).The toilets and washhouses were those for North Rosemount, the washhouse was each tenants for a day and washing took all day from early morning to late on.  A1 washing powder and a lot of hard backbreaking graft with a washboard, lighting was by paraffin lamps and cooking was done on a range in the living room (washing day was soup day as there was just not enough time for the housewife to prepare anything else).North and South Rosemount were demolished to make way for the new road in the 1960s, but strangely the new road never encroached upon either of the two Rosemount Blocks.

Next to North Rosemount was Smiths first garage, it was a corrugated iron sheeting structure, built over the entrance to the "Haugh" and was only big enough to hold one lorry but it was later expanded to hold two. Its hard to believe that the whole Smith empire started here when James and Alexander persuaded their father to enter coal haulage and purchased a second hand lorry. Father and sons worked the lorry continuously, in shifts, until they were able to purchase another two used vehicles. Soon a contract was won with a foundry in Falkirk to deliver gas cookers to Aberdeen and back loads of fish were obtained from the local markets for delivery to Glasgow, and James Smith (junior) was soon considering the possibility of trunk services.

The area of ground known as "The Haugh, was part of the property owned by Adrian Brown of Vellore (part of Parkhall Farm) it's behind the Templars Hall and Burrwood Cottage, in the hollow (which was an old Quarry) behind Lawson Place and Cairneymount Avenue. Jimmy Sharp had a smallholding here he sold eggs to the villagers.  In 1940 Jimmy Shackleton bought it and built greenhouses here as well as keeping hens and having a wood yard.

The last owner was Norman Crawford who added a piggery to the area.

The Haugh was cleared at the time the road was built.

Next is the Templars Hall which was variously known as the Rechabites Hall, or the Church Hall; among other functions held here were the Child Welfare Clinic, the Buroo (men signing on from all around the area not just Maddiston), Film and Magic Lantern shows (first Tuesday of the month, cost 1d), dances, and the Maddiston Players used it as a theatre, in fact it held the position of Village Hall.

The last building seen in the photo is the edge of Burwood Cottage and this is still standing, over the Coal Road is Chrissella Terrace, Magdalene Cottage, the Barbers (or Hairdressers now) then back round on the Main Street all the houses belonging to the Todd family including the one next to Sheilagale which was demolished - Burnside.

Over on the other side of the Main Street is The Seargants Cottage, Abercrombie Cottages and Sulva then just round the corner is Loganfield, now the swing park. Sunnybrae looks as if it's just built then Simpson Drive, coming back out to the Main Street and coming back up the village is Terra Cotta, the Post Office which was built in part of the garden of Viewfield Cottage (now the new S.A. Hall and Old Folks Hall). Maddiston Inn and the Co-op.

Croft Cottages are next, this building was extensively subdivided with flats upstairs, downstairs, back and front.

One of the upstairs flats was described as having a living room and two bedrooms, it had gas lighting and cooking was done on a range in the living room.

Although there was a toilet indoors there was no bath.  It had an outside washhouse.

A description of one of the downstairs houses; It was a three apartment house (kitchen, parlour and bedroom), it had two fixed in beds in the kitchen and gas lighting.

The downstairs houses were room and kitchens, all had outside toilets.

James Bryce's house was described as being aligned the same way as the Smiddy (the front looking down on the back of the Smiddy and the Coach Road):

A set of steps led to the main door at the far end of the building (farthest away from the Main Road).  This door led straight into the living room, access to the bedroom (on the left) and the other room (on the right), the parlour or best room was from the living room.

There was a small scullery off the living room to the rear and up a small step.  Cooking was done on a range in the living room and there was gas lighting.  The house also had a flush toilet.

Many in the group remember when Bella ran the local Post Office from her house.  As well as the usual services provided at the Post Office Bella's was also the call house for Dr Reid (who came from Standburn) this was the Dr's first port of call in the village to collect the names and addresses of those who he had to visit.